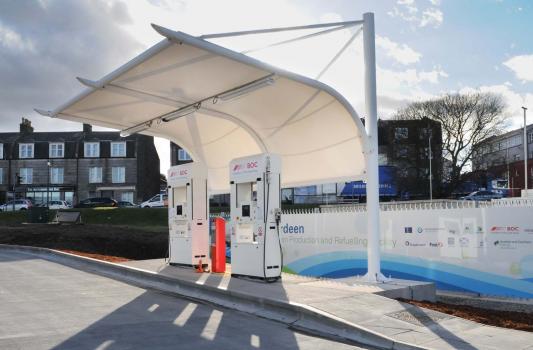 There are two options for hydrogen supply – it can be delivered to the site or it can be generated on-site.

Hydrogen can be delivered either in a liquefied form, by tanker truck, or as a compressed gas in cylinders. Liquefied hydrogen is generally delivered in large volumes whereas compressed gas is far more scalable and can be supplied in small quantities. The delivered hydrogen is usually produced from natural gas in large centralised reformation plants or can be a by-product of chemical industry. In some cases the hydrogen is delivered directly from a hydrogen pipeline.

The two main options for generating hydrogen on-site are

The quality of the hydrogen is depending on the production method. The quality requirements for FCEB's are described by Ballard in this document.

If hydrogen is delivered as a liquid, a cryogenic storage vessel will be required on the site to maintain the temperature in the liquid range (hydrogen has to be cooled down to -253°C). Hydrogen will be decanted from a tanker truck into the storage vessel.

When hydrogen is delivered as a compressed gas, the storage vessel is usually dropped off at the site by a truck and then replaced when empty. For large volumes of hydrogen, a tube trailer will be delivered, which is a 40 foot trailer on which is mounted a bundle of pressurised tubes. For smaller volumes, the hydrogen can be delivered in cylinders, which can be bundled together into packs of varying numbers of cylinders, depending on the demand.

If hydrogen is generated on-site, it will be transferred from the reformer or electrolyser via a compressor to a compressed storage vessel.