The 4 components of a PEM fuel cell 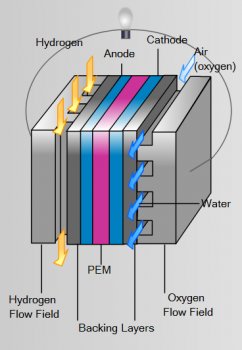 A PEM fuel cell has 4 components:

- The anode, the negative post of the fuel cell, has several jobs. It conducts the electrons that are freed from the hydrogen molecules so that they can be used in an external circuit. It has channels etched into it that disperse the hydrogen gas equally over the surface of the catalyst.

- The cathode, the positive post of the fuel cell, has channels etched into it that distribute the oxygen to the surface of the catalyst. It also conducts the electrons back from the external circuit to the catalyst, where they can recombine with the hydrogen ions and oxygen to form water.

- The electrolyte is the proton exchange membrane. This specially treated material, which looks something like ordinary kitchen plastic wrap, only conducts positively charged ions. The membrane blocks electrons. For a PEMFC, the membrane must be hydrated in order to function and remain stable.

- The catalyst is a special material that facilitates the reaction of oxygen and hydrogen. It is usually made of platinum nanoparticles very thinly coated onto carbon paper or cloth. The catalyst is rough and porous so that the maximum surface area of the platinum can be exposed to the hydrogen or oxygen. The platinum-coated side of the catalyst faces the PEM.

As the name implies, the heart of the cell is the proton exchange membrane. It allows protons to pass through it virtually unimpeded, while electrons are blocked. So, when the H2 hits the catalyst and splits into protons and electrons (remember, a proton is the same as an H+ ion) the protons go directly through to the cathode side, while the electrons are forced to travel through an external circuit. Along the way they perform useful work, like lighting a bulb or driving a motor, before combining with the protons and O2 on the other side to produce water.

How does it work? Pressurized hydrogen gas (H2) entering the fuel cell on the anode side. This gas i­s forced through the catalyst by the pressure. When an H2molecule comes in contact with the platinum on the catalyst, it splits into two H+ ions and two electrons (e-). The electrons are conducted through the anode, where they make their way through the external circuit (doing useful work such as turning a motor) and return to the cathode side of the fuel cell.

Meanwhile, on the cathode side of the fuel cell, oxygen gas (O2) is being forced through the catalyst, where it forms two oxygen atoms. Each of these atoms has a strong negative charge. This negative charge attracts the two H+ ions through the membrane, where they combine with an oxygen atom and two of the electrons from the external circuit to form a water molecule (H2O).

All these reaction occurs in a so called cell stack. The expertise then also involves the setup of a complete system around core component that is the cell stack.

The stack will be embedded in a module including fuel, water and air management, coolant control hardware and software. This module will then be integrated in a complete system to be used in different applications.

Due to the high energetic content of hydrogen and high efficiency of fuel cells (55%), this technology can be used in many applications like transport (cars, buses, forklifts, etc)  and backup power to produce electricity during a failure of the electricity grid.