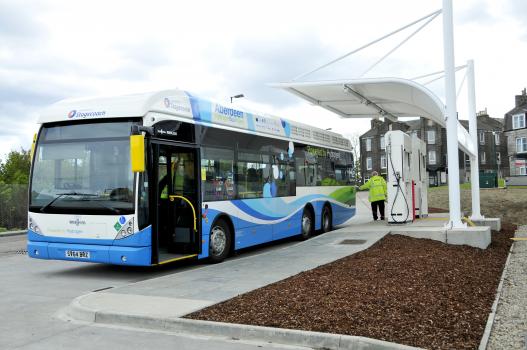 A fuel cell electric bus is an electric bus that includes both a hydrogen fuel cell and batteries/capacitors. In such hybrid architecture, the fuel cell provides all of the energy for the vehicle operation, whilst the batteries/capacitors are able to provide peak power to the motors to meet rapid acceleration and gradients. By using a fuel cell in conjunction with a battery, the size of each can be optimized for a given route.

The fuel cell power module onboard the bus generates electric energy through an electro-chemical reaction leaving only water and heat as by-products, thus there are no local emissions. The electric energy is used to provide direct electric traction and keep the batteries charged. The by-product heat is stored on the brake resistors and is used to maintain heating passenger comfort and considerably increase energy efficiency. The batteries also provide storage for regenerated braking energy. All the energy required for the bus to operate is provided by hydrogen stored on board.

Hydrogen offers higher energy density compared to electrical storage systems such as batteries, this enables a longer range compared to systems where the batteries are used as stores of energy.

Refuelling of the bus takes around 7 minutes for typical fill today, with designs being developed to allow less than 5 minute.

A fuel cell electric bus does not require any additional city infrastructure work or permits other than a centralized hydrogen refuelling station (HRS) at the bus depot.

Because the fuel cell generates only water as an emission it will always be a zero emission bus. Whilst most of the industrial hydrogen used in the world today is produced from fossil sources of energy (mainly natural gas) the majority of hydrogen fueling stations are based on hydrogen for low and zero carbon sources. Hydrogen can be produced from a range of ultra-low carbon routes, including renewable electricity, biomass and .other hydrocarbons including carbon capture and storage. When fueled by hydrogen produced via any of these routes, the fuel cell bus offers a completely zero carbon solution to public transport.

The fuel cell electric bus is an all electric zero emission solution that offers an operation close to that of a diesel bus and hence is marketed as the closest like for like zero emission  option to replace diesel.