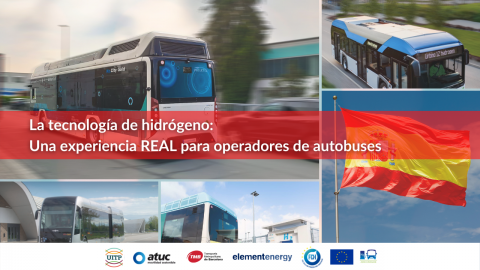 On Tuesday, 29 June, several high-level speakers from different sectors met to discuss the deployment of fuel cell buses (FCBs) and their associated infrastructure. The event was attended by a diverse audience of 150 participants, with a significant presence of Spanish operators and some Latin American attendees. 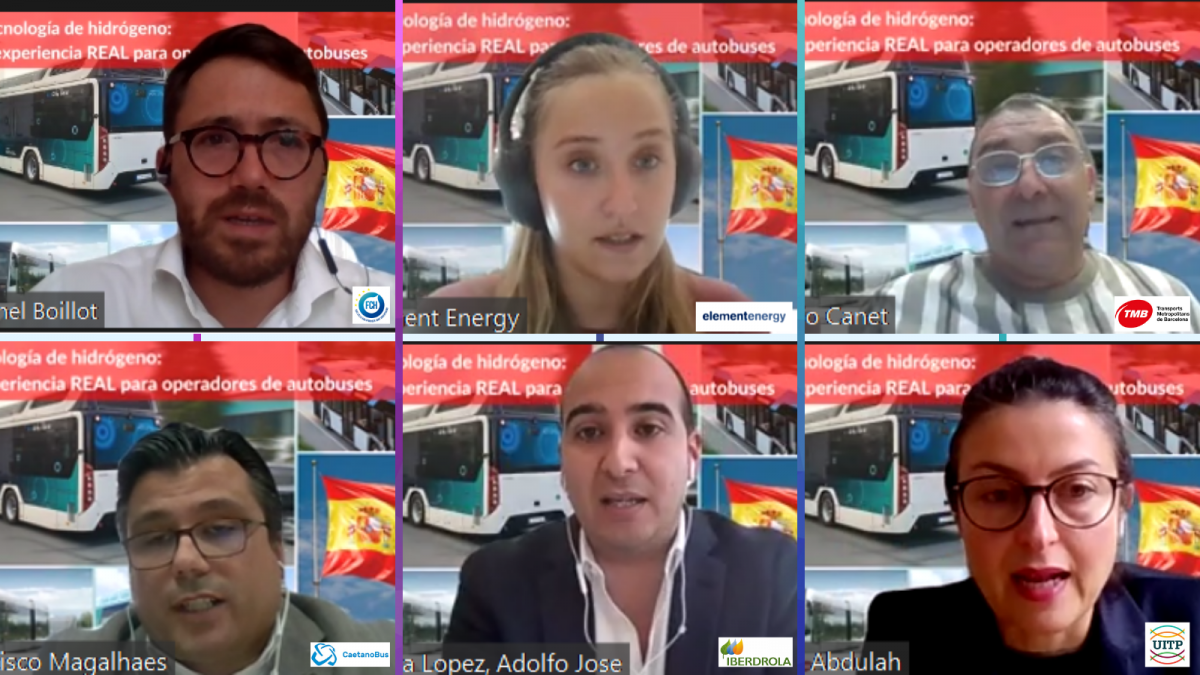 The advantages of this technology were presented to the audience. Indeed, FCBs have a longer daily range and shorter refuelling time than battery-electric buses (BEBs). The adaptability of the refuelling stations was also mentioned several times. Lionel said that “hydrogen refuelling stations (HRS) are now easily expandable up to a capacity of 80-100 buses”. Francisco presented the Caetano H2.City Gold bus and believes that “BEBs and FCBs will coexist, but FCBs will allow greater range and longer distances”.

Mario shared the experience of public transport operator TMB (Transports Metropolitans de Barcelona) in Barcelona, the first Spanish city to acquire FCBs. He explained in detail why TMB decided to explore this cutting-edge technology. One reason is that hydrogen allows “using excess energy from renewables for, among other applications, mobility”. TMB conducted two tenders, one for eight FCBs and one for an HRS. The support of the FCH JU within the JIVE 2 project to fund these eight buses was decisive for Barcelona. As a result, this city aims to reach a total of 60 FCBs.

Speakers agreed that operators and cities must believe in hydrogen. Although it is still an expensive technology, it offers real economic and environmental benefits in the long term. Adolfo, from Iberdrola, gave a presentation on hydrogen infrastructure and mentioned that “today, the price of green hydrogen is between 3 and 7 euros, but this could be reduced to 2 euros by 2030. ” Eva stressed the importance for Spain to include appropriate funding mechanisms for FCBs in its national hydrogen development strategy.

The prices of FCBs have already fallen considerably since 2009, and the JIVE projects have contributed significantly to this trend. According to Mario, “hydrogen is an environmental decision and has enormous price reduction potential. Moreover, hydrogen is already a reality for public transport operators”.

The choice of FCBs has many advantages for Spain. Adolfo said that on the infrastructure side, things are moving quickly, and that Iberdrola is building a corridor throughout Spain. In addition, some EU funding mechanisms presented by Lionel exist to support the deployment of FCBs (PDA, CEF, Hydrogen Valleys). Lastly, Aida ended the webinar with the Clean Bus Europe Platform, which allows connecting operators, cities and funding organisms. UITP’s presentation was followed by a short Q&A session. It showed the growing interest in this technology, and most questions focused on its performance.

This webinar has shown that fuel cell buses have an important role in the decarbonisation of cities and the transition to clean energy. This technology is increasingly in demand, driving down the price of these vehicles and the hydrogen that powers them. It is great to see different sectors joining forces in the transition to renewable energy, in this case, hydrogen.

The recording is available here.

The Fuel Cells and Hydrogen Joint Undertaking (FCH JU) is a Public-Private Partnership in which the European industry, research, academia (represented by Hydrogen Europe and Hydrogen Europe Research) and the EU (represented by the European Commission) work together to accelerate the deployment of fuel cell and hydrogen technologies. The FCH JU supports a wide range of projects, which help put the EU at the forefront of research and innovation, bring the benefits of the technology to the citizens and enhance industry competitiveness.

The overall objective of the JIVE projects is to promote the commercialisation of fuel cell buses through vehicles and infrastructure on a large scale. At the end of the project, fuel cell buses are commercially viable for bus operators. Therefore, they can be incorporated into their fleets without subsidies.

Objectives of the JIVE and JIVE 2 projects: