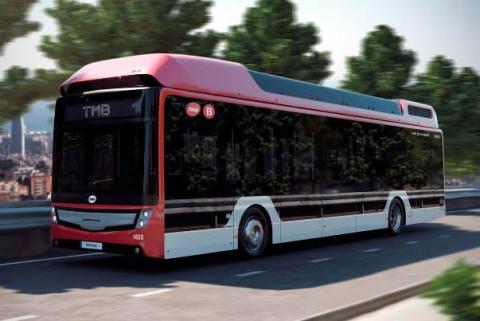 Transports Metropolitans de Barcelona (TMB) and Caetano Bus yesterday signed a contract for the supply of eight hydrogen-powered buses, with which Barcelona will position itself as a benchmark in the application of this zero-emission technology in the regular passenger transport of an urban network in Spain.

The acquisition of the eight fuel cell electric vehicles is part of TMB's strategic option to promote the use of green gases (hydrogen of renewable origin, biogas) in the modernisation and greening of the bus fleet in the line to reduce emissions and decarbonise public transportation.

The eight buses acquired by TMB will be the H2.City Gold LHD model, 12 metres long and with three-door aluminium body. Its technological core will be a Toyota 60kW fuel cell. Siemens will provide the engine, 180 kW of maximum power, and the electronic part. The batteries, of LTO technology and 44 kW / h, will store the energy generated by the braking, of up to 50%.

The manufacturer estimates for the H2.City Gold LHD a consumption of fewer than 9 kilos of hydrogen per 100 kilometres and a minimum range of 400 kilometres with full capacity tanks of 37.5 kilos. They will arrive in Barcelona in November 2021 with the forecast that they will join the service at the beginning of 2022.

The vehicles will be assigned to the Zona Franca Business Operations Centre. They will be supplied with hydrogen at the refuelling station to be built in the same estate from the agreement signed by TMB and the Zona Franca Consortium last June. The hydrogen refuelling station, the first in Spain with a public vocation, will supply about 160 kilos of hydrogen of renewable origin daily to TMB's eight fuel cell buses and will also serve other companies in the area and individuals. Currently, the construction of the plant is in the tendering phase.

The acquisition of the eight hydrogen vehicles is supported by the European project JIVE 2 for the promotion of fuel cell and zero-emissions vehicles, co-financed by the Fuel Cells and Hydrogen Joint Undertaking, in which TMB participates as the only Spanish operator. The project is promoted with the collaboration of the Barcelona Metropolitan Transport Authority.