Skip to main content
Home Spotlight on Groningen: a hydrogen society in the making – focus on mobility

Spotlight on Groningen: a hydrogen society in the making – focus on mobility 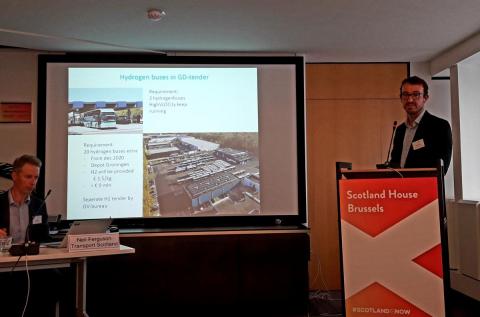 Today, Erwin Stoker presented the fuel cell bus deployment plans in the region of North Holland/province of Groningen in a context of strong investment in developing  a hydrogen society in the North part of the Netherlands. Erwin Stoker is Team leader in Public Transportation Development at OV-bureau Groningen Drenthe (public transport authority). The event, entitled “time to move on? Advancing zero emission transport solutions” is organised by HyER and Transport Scotland as part of the Sustainability Week (EUSEW) and aims at presenting lessons learned and share best practices on zero emission transport initiative in experimented cities and regions across Europe.

“The other electric bus”

Two fuel cell buses are in operation since December 2017, as part of the High V.LO-City project, co-funded by the FCH-JU. Each bus drives 280 km/day on a daily base. They use a hydrogen refuelling station provided by PitPoint.

Hydrogen used to refuel the buses is green hydrogen. It is produced from by-product from the chlorine production plant of Nouryon in Delfzijl coming from a wind farm. Hydrogen is distributed by pipeline (thus lowering the costs) to the hydrogen refuelling station. The buses are then refuelled.

Why is the region investing in hydrogen? As Erwin pointed out: “battery electric buses are suitable for short range, fuel cell buses for longer range”

Therefore, a minimum number of 20 additional fuel cell buses will be deployed in the region of Groningen-Drenthe by December 2020 as part of the JIVE2 project, co-funded by the FCH-JU. Green hydrogen will be provided at a price of €3,5/kg to the operator Qbuzz. This price is guaranteed by the public transport authority.

In addition, other transport applications are being replaced by zero emission hydrogen technology in the region: fuel cell taxis are being deployed as well as municipal road sweeping vehicles and 10 fuel cell garbage trucks while there are discussions to consider the option of hydrogen trains.

They are part of a wider plan from Northern Netherland to turn the region into a hydrogen-based region. Excess renewable electricity will be transformed to hydrogen and stored in hydrogen form and then used by consumers indifferent applications: by the industry, mobility and houses, thus acting as an enabler for a zero emission society.  Tip from Erwin to other regions: “ Create a hydrogen valley, don’t focus on public transport only”.