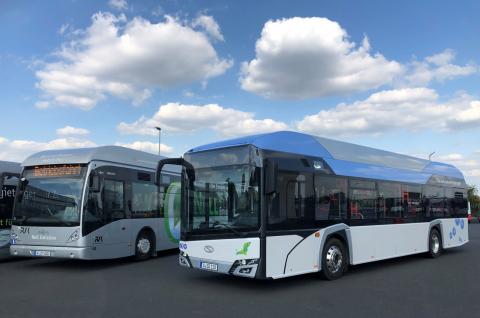 Regionalverkehr Köln GmbH (RVK) has just placed an order for 15 hydrogen-powered fuel cell hybrid buses with Solaris Bus & Coach S.A. From 2021, these vehicles will be successively integrated into RVK's fleet.

As with the previous bus order, the tender for the buses was issued jointly with Wuppertaler Stadtwerke GmbH. The joint procurement made it possible to comply with the maximum price per bus of 625,000 euros specified by the funding authority. A total of three bids were submitted in the tender. Based on the best offer, the contract was awarded to Solaris.

"Thanks to the subsidies and the approval of our owners, we are very much closer to a complete restructuring of our bus fleet and infrastructure. This is currently unique in this dimension," says RVK Managing Director Eugen Puderbach.

RVK began testing fuel cell technology in regular service as early as 2011. Following the test operation of two prototypes, two pre-series vehicles were deployed in 2014 and 35 series production vehicles of the type A330 FC from Van Hool were commissioned at the end of 2019 and in the first half of 2020. The construction of two hydrogen refuelling stations is nearly finalised.

The use of biogas buses in the Euskirchen district is also part of this sustainability strategy, which is reflecting regional reality.

Link to the original press release in German here