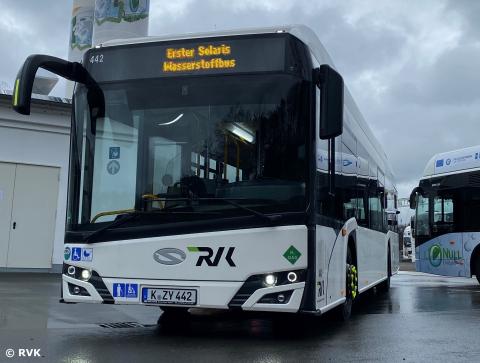 German transport operator Regionalverkehr Köln (RVK) has taken delivery of the first of 15 Solaris Urbino 12 hydrogen fuel cell buses ordered in March 2020. The bus will now be tested at RVK's Wermelskirchen branch in the Rheinisch-Bergisch district. This is the first time a new manufacturer has joined RVK's hydrogen vehicle fleet, which now totals 37 buses.

"This year we continue to make progress in converting the bus fleet to a total of 52 buses. This is currently unique in this dimension and builds on the various project steps that have been implemented since 2011," says Marcel Frank, Managing Director at RVK.

After this first bus, the other 14 buses will be delivered successively between July and December 2021. They will be distributed among three RVK locations. Five buses will be delivered for regular service in the Rheinisch-Bergisch district, five for transport in the Rhein-Sieg district on the Rhine's left bank and five for the Hürth municipal transport service. The RVK site in Wermelskirchen has had ten hydrogen buses since summer 2020.

Stephan Santelmann, the District Administrator of the Rheinisch-Bergisch District (RBK), stated, "Climate protection remains a fundamentally important goal. Public transport will play a major role in this, especially given the federal government's strategies, the federal states, and the EU. RVK is a pioneer in this respect, which also benefits the Rheinisch-Bergischer Kreis as one of the shareholders."

The site's driving staff is now being trained on the new Solaris Urbino 12 hydrogen bus type. Together with a Solaris employee, they will be instructed in the refuelling procedures and the unique features of bus technology and hydrogen propulsion. The necessary infrastructure is part of RVK's growing project package and was implemented in 2020 with two of the company's hydrogen filling stations (in Wermelskirchen in the RBK and Meckenheim in the Rhein-Sieg district).

The 15 Solaris buses were purchased within the framework of the JIVE 2 project. They were financed by the Fuel Cells and Hydrogen Joint Undertaking, the German Federal Ministry of Transport and Digital Infrastructure (BMVI) through the NIP2 programme and the Ministry of Transport of the State of North Rhine-Westphalia.