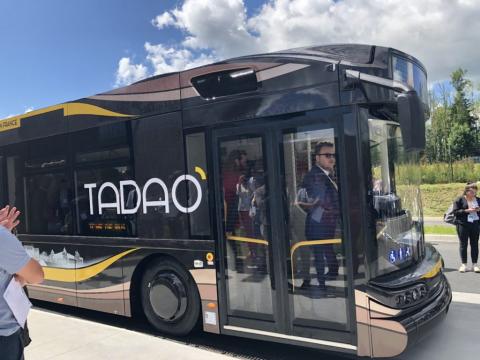 Last Friday, the first fuel cell bus was inaugurated by the transport authority in the area: the Artois-Gohelle transport authority (SMT-AG) in the presence of Xavier Bertrand, president of the Region Hauts-de-France. This bus is the first one of a fleet of six fuel cell buses, which will be used on the new Bus Rapid Transit Service (BRT) bus line “Bulle 6” between les towns of Auchel and Bruay-la-Buissière. Each bus, delivered by the French manufacturer Safra, has a capacity of 87 passengers, a range of >300 kms and can be refuelled in 15 minutes max. It means that the buses are only refuelled once per day. The buses are equipped with 31kg on-board hydrogen storage (on the roof) and a 30 kw fuel cell (Symbio/Michelin) that powers the electric motor.

“ The perspective of using hydrogen on the TADAO network, operated by Transdev, has been the result of a bold choice to introduce a real innovation. This fuel could represent the fuel of the future in public transport” stated Laurent Duporge, president of the SMT-AG, during the inauguration.

From a bus driver perspective, William Mallet said: “it is a pleasure to drive this bus. One key word: serenity”.

Sophie Masure, in charge of the project within SMT-AG: “for a car to drive forward, you need fuel. Here the fuel is hydrogen. We use water and electricity produced from renewable energies. The electrolysis process allows separate hydrogen and oxygen from water”.

ENGIE, via its subsidiary GNVERT has provided the design, supply, installation and maintenance of the hydrogen refuelling station. This station is equipped with McLyzer and McFilling technologies. In its current configuration, the McPhy station can produce and deliver over 200 kg of hydrogen a day. Its capacity can be increased by 30% without changing the facility’s total surface area, if required by future needs (e.g. expansion of the fleet).