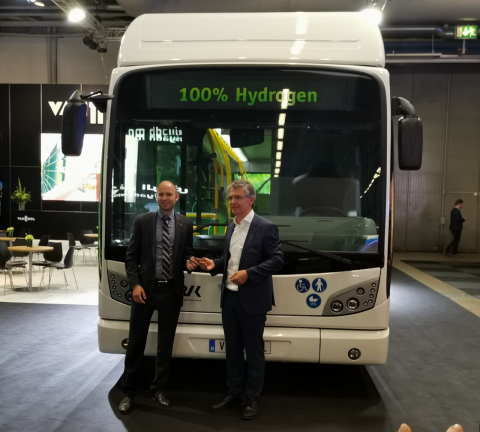 Yesterday at the UITP summit (10/6/2019), the keys of the new Van Hool fuel cell bus were handed over by bus OEM Jan Van Hool to Jens Conrad from Regionalverkehr Köln GmbH (RVK).

This bus is one the 30 buses ordered by RVK last year, along with 10 buses for Wuppertal. The buses will gradually enter in service this autumn.

Regionalverkehr Köln GmbH (RVK) is the public transport operator in the region of Cologne. It organizes and maintains public transport for the Cologne region. RVK thus connects urban agglomerations with sparsely populated, rather rural areas. RVK is aware of its social and environmental responsibility as a strongly anchored and committed company in the region. In this sense, through the project “Zero Emission/ Null Emission”, RVK, has set an ambitious target to replace its entire diesel bus fleet with alternative powertrains. From 2030 onwards, only zero emission buses will be procured by RVK, and in the meantime a significant fleet of emission free buses and corresponding infrastructure will be built up.

The 30 buses to be deployed by RVK are part of the FCH-JU co-funded JIVE project, and will be completed by an additional 15 buses as part of JIVE2 project – these orders are a strong step to clean public transport in the Cologne region.

Combined, the JIVE projects will deploy nearly 300 fuel cell buses in 22 cities across Europe by the early 2020s – the largest deployment in Europe to date.

A few words about the bus:

The Van Hool A330 type has dual axles and a length of 12 metres. The bus will be equipped with the latest FCvelocity-HD85 Fuel Cell module from Ballard Power Systems of Vancouver, Canada and fitted with a 210kW Siemens PEM electric traction motor. The bus is designed for 29 seats and 46 standing passengers, with space for two wheelchair users and a pram.

Thanks to the hybrid power source, the buses, with a tank capacity of 38.2kg of hydrogen on board, will be able to carry out a full day's schedule of 350km.