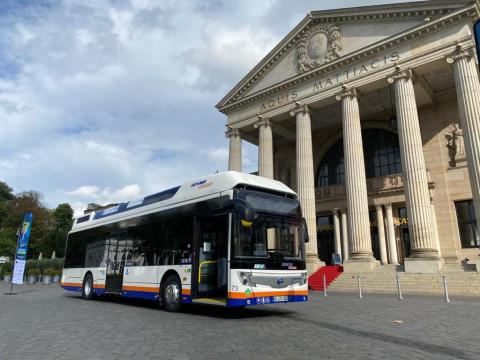 The German transport operator ESWE Verkehr officially took delivery of its first Caetano hydrogen fuel cell bus on 5 October 2021. By the end of December 2021, nine fuel cell buses from Portugal will be delivered to Wiesbaden. The mobility service provider has thus reached the next milestone in its corporate history.

As the mobility service provider of the state capital Wiesbaden, ESWE Verkehr is pursuing the goal of locally zero-emission public transport. The fuel cell technology uses green hydrogen, the most sustainable hydrogen option and a central component in improving Wiesbaden's quality of air and life. The new and emission-free fuel cell buses are an important part of the clean air plan of the state capital Wiesbaden.

Since the new and zero-emission vehicles are paid largely by subsidies, representatives of the subsidy providers were present at the launch event in Wiesbaden, including Elena Hof, programme manager of the National Hydrogen and Fuel Cell Technology Innovation Programme at NOW GmbH. In her introductory remarks, she emphasised the special importance of hydrogen as an energy carrier and its high environmental compatibility and future viability. "Hydrogen and fuel cell technology is an important future technology for Germany as a business and mobility location. Moreover, in local public transport, hydrogen propulsion is a sensible supplement to battery-powered vehicles for achieving climate targets, especially for long and topographically demanding routes.", she said.

The Hessian Minister of Economics and Transport, Tarek Al-Wazir, said: "Zero-emission mobility is an important task for Hessen, for reasons of climate protection and air pollution control. Alternative drive technologies play an important role in this, including hydrogen. That is why the state has also funded the associated hydrogen refuelling station. However, it is also clear that hydrogen does not occur naturally and must be produced at great expense. Therefore, it is not climate and environmentally friendly by itself, but only when produced from renewable energies and used where other solutions are not possible. Therefore, the expansion of wind energy and other renewable sources must be promoted in parallel. The new fuel cell bus that will travel through the Hessian state capital in the future is a supplement to the battery-electric buses that are already gradually replacing diesel vehicles in Wiesbaden. Especially for long-distance routes and difficult topographies, it can be a solution and shows that public transport plays a central role in climate neutrality and transport turnaround. It is gratifying that more fuel cell buses will be added by the end of the year. They ensure cleaner air and less noise in the city."

ESWE Verkehr has already gained experience with a hydrogen refuelling station on its company premises and a rented fuel cell bus for over a year. Due to their range, which is up to 400 kilometres depending on the operating profile and weight of the bus, the fuel cell buses are preferably used on longer bus routes. The new buses can be refuelled in well under 15 minutes.

ESWE Verkehr is taking another big step towards realising the company's goal of "Our Vision - Zero Emissions". Wiesbaden's head of transport, Andreas Kowol, also emphasised the importance of this goal: "Today, no one can say with certainty whether hydrogen or battery buses will ultimately prevail - or both side by side. That is why we at ESWE Verkehr are using both technologies with an open mind. As a result, today, we are one step closer to the goal of climate-neutral public transport. I would like to express my sincere thanks to all those involved, especially the funding bodies and the city council, for making such innovations financially possible."

Bart Biebuyck, Executive Director, Fuel Cells and Hydrogen Joint Undertaking, said: "We are delighted to bring an innovative fleet of 10 fuel cell buses to the streets of Wiesbaden and believe that this will be an important milestone for a cleaner and more efficient public transport network. The FCH JU wants to support the uptake of innovative hydrogen solutions across Europe. With its zero-emission buses, JIVE represents an important success story in reducing the carbon footprint in our cities". 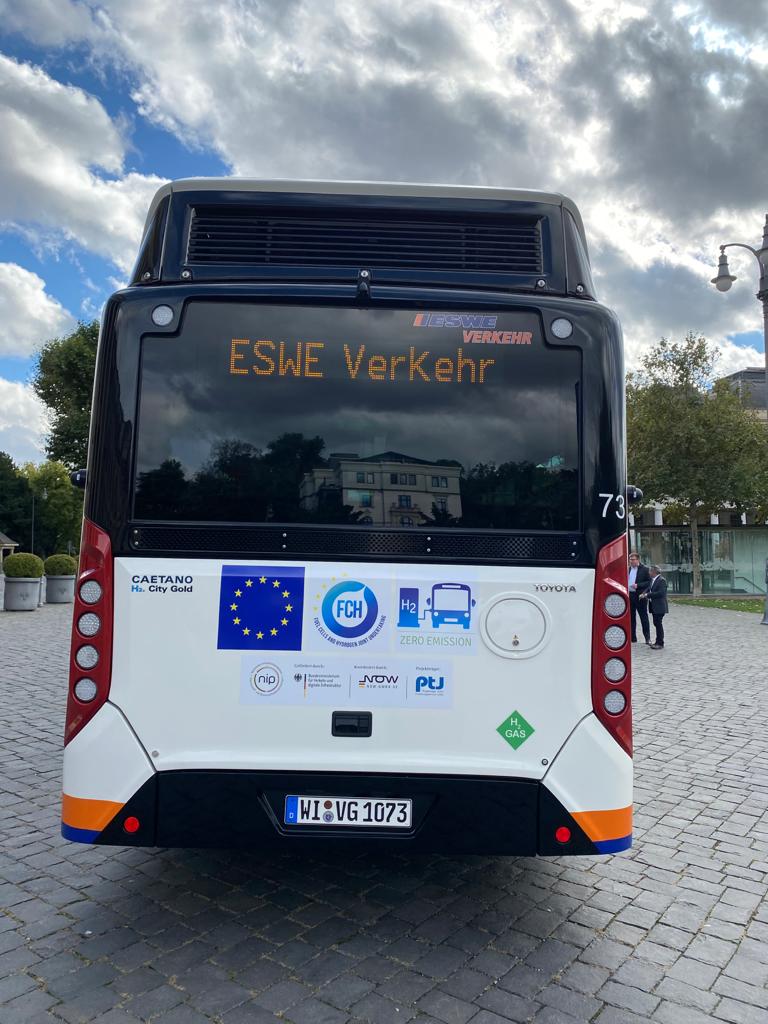 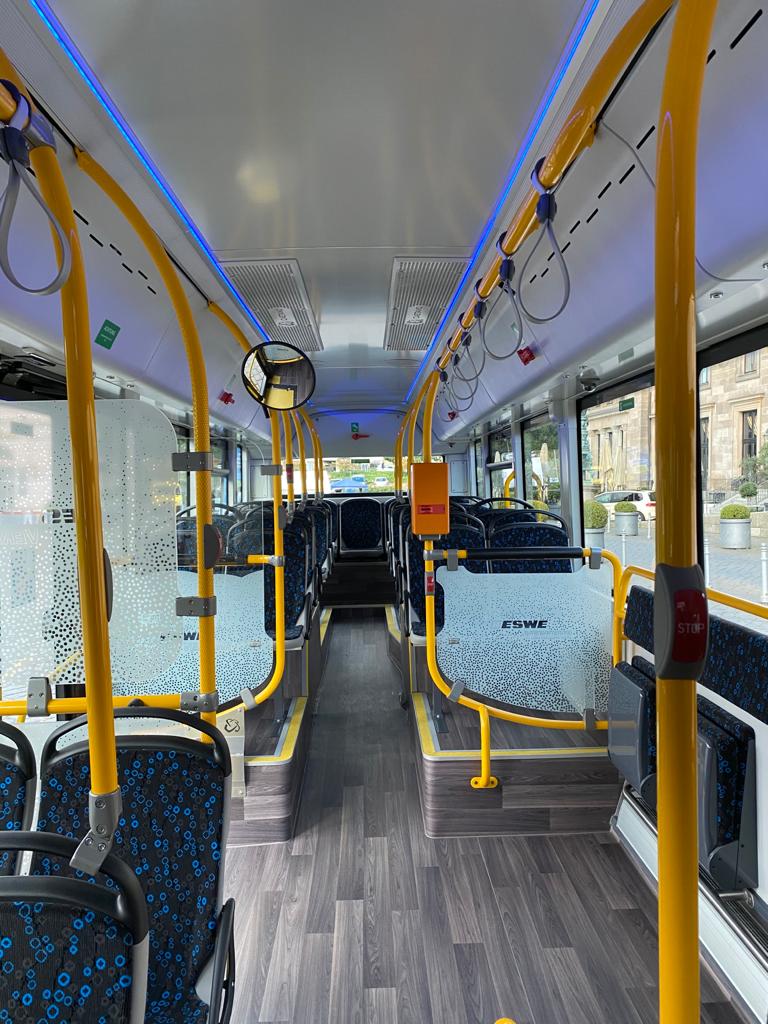 The host of the event and Managing Director of ESWE Verkehr, Jörg Gerhard, thanked the project's supporters: "Today, I would like to express my special thanks to our funding providers. First and foremost, the European Union and the Federal Ministry of Transport and Digital Infrastructure. Thanks to the funding, we are again taking a big step toward converting our emission-free bus fleet and the associated infrastructure. This is one of the reasons why our company is changing from a transport company to a modern and sustainable mobility service provider for the state capital Wiesbaden. ESWE Verkehr continues to pursue a technology-open approach in its conversion strategy. We firmly believe that hydrogen and fuel cell technology can and will make a significant contribution to the sustainability of public transport in Wiesbaden".

The vehicles are funded by the EU project "JIVE" (Joint Initiative for Hydrogen Vehicles across Europe) with 1.95 million euros and specifically within the framework of the "Fuel Cells and Hydrogen Joint Undertaking" (FCH JU). Further funding totalling 1.685 million euros is provided by the National Hydrogen and Fuel Cell Technology Innovation Programme (NIP) of the Federal Ministry of Transport and Digital Infrastructure (BMVI). The funding guideline is coordinated by NOW GmbH and implemented by Project Management Jülich (PTJ).