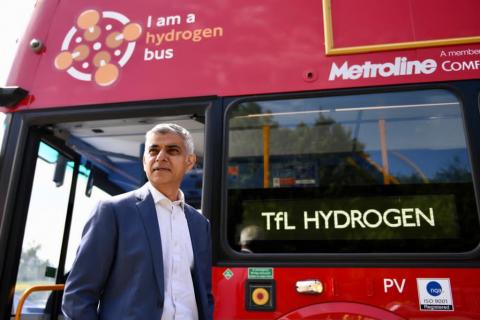 The Mayor of London, Sadiq Khan, launched England’s first-ever hydrogen double-decker buses today. This event marks another major step towards making the bus fleet zero-emission and cleaning up London’s toxic air.  These zero-emissions vehicles have been co-financed by the Fuel Cells and Hydrogen Joint Undertaking as part of the JIVE poject.

The 20 new environmentally friendly buses, the first of their kind to be launched in England, will produce no pollution from their exhausts and join more than 500 electric buses in the core fleet, which are already zero-emission. The new hydrogen fuel cell double-decker buses are first being introduced on route seven between East Acton and Oxford Circus.

Hydrogen used in a fuel cell is free from harmful emissions. The only by-product is water from the chemical reaction of hydrogen with oxygen from the air. This process produces electricity to power the bus. The buses will help clean up the air and improve the health of Londoners by reducing the level of harmful nitrogen oxide in the air. In addition, passengers will benefit from smoother, quieter journeys due to fewer vibrations. They will be able to take advantage of free-to-use USB charging points.

The Mayor’s green transport investment is also supporting jobs across the UK. The buses were manufactured by Wrightbus in Northern Ireland, helping to create new jobs. Luxfer manufactures the gas cylinders in Nottingham. The hydrogen for the buses is currently being produced at Air Liquide’s plant in Runcorn, harnessing waste hydrogen as a by-product from an industrial chlor-alkali plant. Oxford-based Ryze Hydrogen is responsible for transporting the fuel to the fuelling station. By 2023, the hydrogen will be even greener. It will be produced by electrolysis powered by a direct connection to an offshore windfarm.

A new state-of-the-art fuelling station completed by Danish engineering firm Nel Hydrogen will top up each hydrogen fuel cell bus just once per day in as little as five minutes.

In addition to around £6 million of funding from TfL, more than £5 million of funding has been provided by European bodies - by the Fuel Cells and Hydrogen Joint Undertaking, and the Innovation and Networks Executive Agency (INEA), an executive agency of the European Commission – as well as £1 million from the Office of Zero-Emission Vehicles.

TfL has paved the way for cheaper hydrogen buses across the rest of the UK, having led the UK procurement within the Joint Initiative for Hydrogen Vehicles across Europe (JIVE) to buy in bulk with other UK authorities. In total, the JIVE project seeks to deploy 139 new zero-emission fuel cell buses and associated refuelling infrastructure across five European countries and has received funding from the Fuel Cells and Hydrogen Joint Undertaking.

With sustained financial support from the Government, TfL could accelerate its plans for a zero-emission bus fleet from 2037 to 2030 to reduce carbon emissions and address the public health emergency caused by dirty air.

The Mayor of London, Sadiq Khan, said, “We have made real progress in London to clean up our air, but we still have a long way to go because toxic air pollution in our city is still leading to thousands of premature deaths every year and is stunting the growth of children’s lungs. As part of our world-leading ongoing efforts, I’m proud to announce England’s first hydrogen double-decker buses, which don’t produce any harmful emissions, will now be put into service.

“Our investment in these hydrogen buses is not only helping us to clean up London’s air but is supporting jobs and local economies across the UK. This is a great demonstration of how tackling air pollution and the climate crisis and boosting economic growth is about regions working together, investing in the latest technology.

“I’ve worked hard to ensure TfL’s entire core bus fleet across London now meets the ULEZ standards, and this includes 500 electric buses. Our new investment in hydrogen buses will move us even closer to our ambition of making all London buses zero-emission by 2030.” 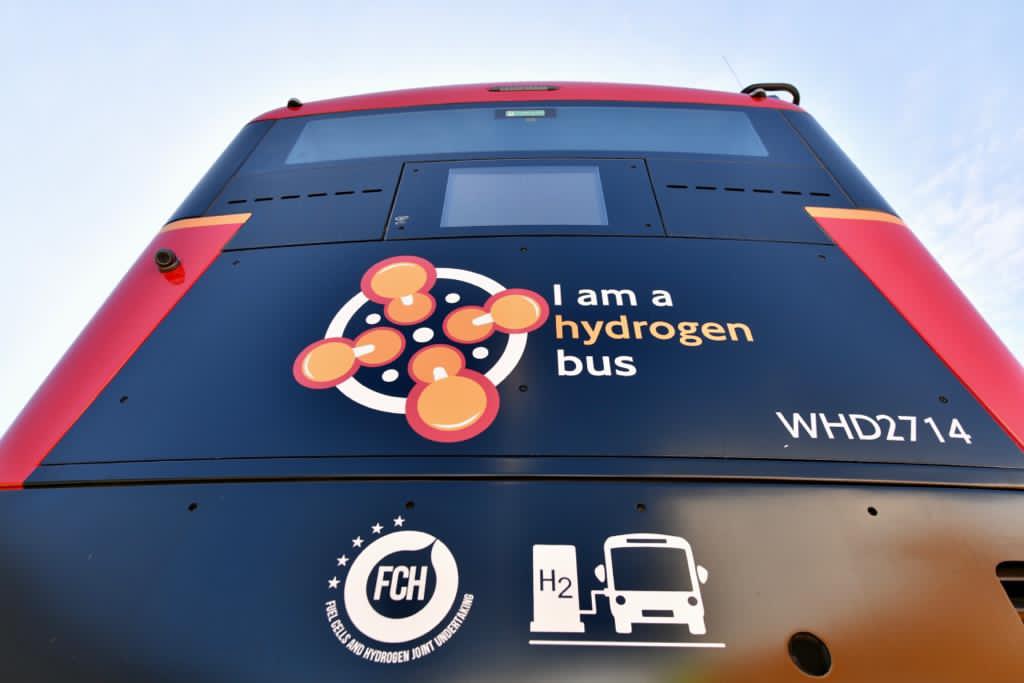 Interim Director of Buses, Transport for London, Geoff Hobbs, said, “London may have one of the cleanest bus fleets in Europe, but we need to continue to act now to tackle climate change and the city’s toxic air quality. Introducing these hydrogen double-decker buses to our fleet, alongside electric buses, diversifies our green bus portfolio and helps us use the right technology for the varying operational requirements of our vast network. This will help Londoners breathe cleaner air.”

“Our investment in hydrogen won’t just benefit London, either. Outside the capital, we are supporting jobs across the UK, and our involvement with the industry across Europe is making cleaner fuels more affordable to cities all over Europe.”

Wrightbus CEO, Buta Atwal, said, “At Wrightbus, we’re incredibly proud to be launching our world-first zero-emission hydrogen double-deckers onto the streets of London to help turn its iconic red buses green. London residents - and visitors to the capital from around the world - can experience what it’s like to ride in a UK-made hydrogen-fuelled vehicle that produces no harmful emissions from its exhaust. Thanks to TfL’s visionary approach, the city will have the first fleet of hydrogen double-deckers in England. The benefits to the city in terms of CO2 reduction will be significant. We hope that other cities around the country will follow London’s lead and help us in our ambition to decarbonise public transport and improve air quality.”

Sean O’Shea, CEO at Metroline, said, “hydrogen is an extremely promising renewable fuel for public transport vehicles, and we are looking forward to proving its application on London’s roads. The hydrogen buses are an exciting new addition to our fleet and highlight Metroline’s continued dedication to making London’s streets greener. Our engineering teams have been hard at work preparing the buses for service. We are proud to be operating the first hydrogen-powered double-deck buses in London in the hope that it will further showcase the application of sustainable vehicles in the capital.”

Bart Biebuyck, Executive Director of the Fuel Cells and Hydrogen joint undertaking (FCH JU), said, “We are proud to see that thanks to our grant, the JIVE project enables the market size scale-up of fuel cell buses in Europe and contributes to the price reduction for the entire value chain. With green hydrogen solutions, we can improve London's air quality and build a climate-neutral transport system for our future generations. London has a long and successful history with fuel cell buses and played a key role in leading a joint procurement scheme on behalf of several UK cities for the deployment of world-first double-decker buses running on hydrogen”.

Jens Egholt Rasmussen, Senior Director Global Sales at Nel Hydrogen A/S, said: “In May 2019, we were proud to announce a contract for a bus H2Station™ solution for Transport for London. Today, I’m happy to confirm a dual bus H2Station™ has been commissioned and is now fully operational. While currently in the ramp-up phase, eventually, 20 buses will be fuelled at the station on a daily basis. Hydrogen buses are already a competitive alternative to battery buses, with significantly faster fuelling time and, therefore, less downtime. They are also becoming more of a competitive alternative to diesel buses on a total cost of ownership basis. The market for such solutions is growing quickly, and we see significant opportunities going forward. This is an important step in the right direction.”