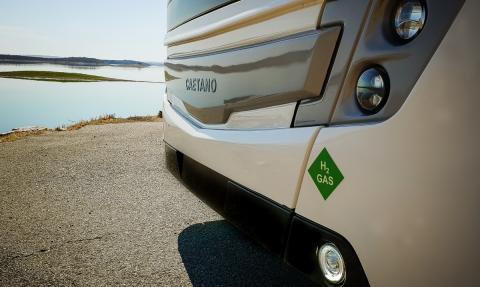 Two Caetano H2.City Gold hydrogen-powered buses will be put into service in Germany later this year as part of the eFarm project. The hydrogen bus was unveiled at Busworld 2019 in Brussels. It was then announced that 2020 would be the year in which the H2.City Gold, based on Toyota's fuel cell technology, would be launched in Europe. The vehicle has a range of 400 km, according to the manufacturer.

The eFarm project is one of the largest green hydrogen mobility schemes in Germany. By the end of this year, two Caetano H2.City Gold units will be delivered to Niebüll in North Frisia (near the border with Denmark). The deployment of these buses aims to achieve one of the ambitious goals of the eFarm project: a hydrogen network from renewable energy sources (from production and processing to distribution and fleet use).

The 12-metre hydrogen-powered Caetano buses will be flexibly operated on several scheduled service lines by Autokraft GmbH, which belongs to the Deutsche Bahn AG (DB) group. Completely emission-free, the 2-door Caetano H2.City Gold is equipped with a Toyota fuel cell system, which is the main feature of the Portuguese manufactured hydrogen bus. CaetanoBus is proud to be the first company in Europe to use Toyota's leading fuel cell technology, based on the same fuel cell as the Toyota Mirai car.

Thanks to the application of this advanced technology, the buses will offer a range of 400 km on a single charge, contributing to flexible operation, says CaetanoBus. Power supply components, such as hydrogen tanks, batteries, and fuel cell stack, placed on the roof, contributing to a low-floor design and a comfortable passenger experience. In the event of an accident, thanks to the installed hydrogen leakage sensors and crash sensors, the flow of hydrogen is cut off from the tanks.

'The order is an important step for realising Germany's largest green hydrogen mobility project eFarm. The cooperative project, in which 20 regional partners are involved, including citizen wind and solar parks as well as public utilities, was initiated by GP JOULE in 2017. A joint hydrogen infrastructure from production and processing to fleet deployment is being developed. Citizens and companies who want to purchase a hydrogen vehicle thus receive supply security for 100% green, regionally generated hydrogen from wind power. With CaetanoBus, we are pleased to have found a reliable and future-oriented partner who has convinced us from the start with its innovative buses, technology and attractive design.', said Ove Petersen, CEO of GP JOULE, a system provider for integrated energy solutions from solar, wind and biomass power.

Kohei Umeno, CaetanoBus Sales Director, stated, 'GP Joule is developing the largest green hydrogen mobility scheme in Germany. We are very proud that Caetano can be a part of this initiative by delivering our H2. City Gold and help to create a greener future in which we want to live in.'