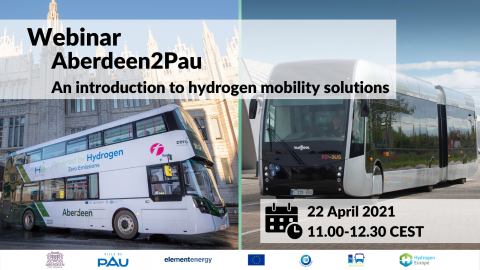 Two cities, Aberdeen (Scotland) and Pau (France), were brought together on Thursday 22nd April to present and discuss their experience of deploying fuel cell buses and their associated infrastructure. A diverse audience of over 100 attendees heard from these two ‘early movers’ about the great benefits that hydrogen brings for local energy system decarbonisation, as well as the practicalities of operating the vehicles and the infrastructure.

Both cities are leaders in their own country when it comes to deployment of fuel cell buses. Louise Nappier of Aberdeen City Council and Mélanie Pedeutour of Syndicat Mixte des Transports Urbains de Pau were able to shed light on how to create a hydrogen bus strategy.

In Aberdeen, the key role of hydrogen to transition from an oil-based to a hydrogen-based economy was emphasised: as a traditional oil-based economy, a new hydrogen economy, using offshore wind assets, presents a great opportunity for jobs growth. The new fuel cell-powered Bus Rapid Transport (BRT) system in Pau is a way to 1) push car users towards use of public transport 2) deploy zero emission public transport. The huge commercial success enjoyed by Pau’s hydrogen BRT system since it entry into operation in December 2019 has proven citizen buy-in to this transition.

The speakers were also able to share quantitative evidence of success. A kilogram of CO2 is expected to be saved for every kilometre driven by the 25 double decker fuel cell bus fleet put on Aberdeen’s roads in January 2021, while Pau mentioned a bus availability over 95%. Both cities agreed on the fact that the technology is now reliable and mature enough to be scaled-up.

In concluding, the speakers stated that the successful deployment in their cities would not have been possible without the support of the FCH JU within the JIVE and JIVE 2 initiatives. George Carew-Jones, from the consultancy Element Energy, coordinator of JIVE & JIVE2, noted that the JIVE initiatives have indeed allowed a substantial growth in the number of cities deploying fuel cell buses, bringing the industry to a point where further cities and regions should be confident to deploy the technology themselves. An exciting Q&A session followed the presentations from Aberdeen and Pau, demonstrating the increased interest in this type of initiative.

On the question of the higher Total Cost of Ownership (TCO) of fuel cell buses versus other alternative technologies, the city of Pau picked the fuel cell bus option as the TCO is expected to reach parity with battery electric technology over a 15 years period, highlighting that additional buses would have been needed in the case of battery electric technology (12 buses vs 8 buses). In addition, the fuel cell buses offer similar operational flexibility than diesel buses.

To conclude the session, Louise said: “hydrogen has an enormous potential to decarbonise transport, heating, industry, you name it. We just need more regions to go forward. Mélanie agreed with her and added that “we need to organise the value and remember ourselves than hydrogen is the best way to integrate the growing amount of renewable energy sources in our energy system”

The recording is available here.

The Fuel Cells and Hydrogen Joint Undertaking (FCH JU) is a Public-Private Partnership in which the European industry, research, academia (represented by Hydrogen Europe and Hydrogen Europe Research) and the EU (represented by the European Commission) work together to accelerate the deployment of fuel cell and hydrogen technologies. The FCH JU supports a wide range of projects, which help to put the EU at the forefront of research and innovation, bring the benefits of the technology to the citizens and enhance industry competitiveness.